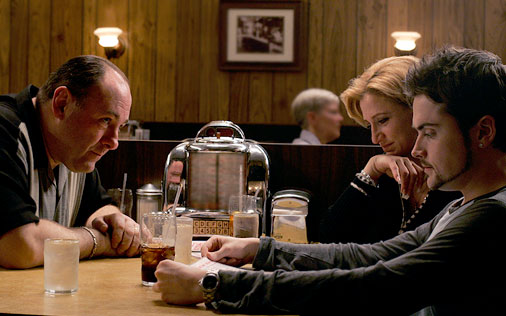 This post contains spoilers for the finales of The Sopranos, Breaking Bad, and The Wire.
It is a scene as familiar as some good gabagool or the dirty toll booth on the Jersey Turnpike. Tony Soprano walks into Holsten’s diner and sifts through the songs on the jukebox. He selects Journey’s “Don’t Stop Believin’” and sits in a booth. The mafioso hunches over a menu and the camera flashes to people as they walk into the restaurant. The moment unmistakably feels like a hit scene. He is gradually joined by wife Carmella and son A.J. as his daughter Meadow makes multiple attempts at parallel parking her Lexus outside. After his daughter finally parks her car she sprints across the street towards the diner. The bell in the doorway rings, Tony looks up, and the screen goes to black. And thus ended one of the most storied shows in television.
The closing moments of The Sopranos are among the most memorable in the annals of television. Aired on June 10, 2007, the episode “Made In America” capped six seasons of a show that had changed television. The series remains a signature program for HBO and has become a benchmark in an era of television drama where anti-heroes and moral gray areas dominate storylines. The open-ended closure of the last episode allowed for the final moments of The Sopranos to become one of the most widely-debated moments in small screen history. Ten years later, what is the legacy of the finale?
Of course, the diner segment was not the only scene in the finale. The most important story of the episode is the looming testimony of capo Carlo Gervasi and Tony’s likely indictment. The tension between Tony’s crew and rival boss Phil Leotardo ends when Soprano’s rival is capped and memorably run over in a gas station parking lot. A.J., the dolt of the series, manages to destroy an SUV, contemplate joining the army, and lands work in a movie (all in the same episode). Sadder moments are shown as Bobby Bacala is laid to rest and Junior Soprano’s dementia becomes fully realized.
But that diner scene.
The finale lacked a definite ending like Breaking Bad, another modern-era drama that has left its mark on television. The AMC series finished with a much more complete ending when creator Vince Gilligan frees Jesse and Walter dies. Breaking Bad clearly achieved a much more satisfactory conclusion.
Last episodes do not have to have to cater to the thrills of an audience to be successful. The Wire, an HBO contemporary of The Sopranos, concluded by showing the characters as they continue their lives in Baltimore. Some have happy endings. Others fall down a dark path. The sad message of the last show was clear: after five seasons of The Wire, life in Baltimore remained the same as it was when the show started.
How you evaluate the finale depends on how you interpret the last seconds of The Sopranos. The most obvious theory is that Tony is about to be whacked as he sits in the diner. A second argument is that creator David Chase wanted to depict the constant turmoil in Tony’s life coupled with the anxiety that he could be killed at any time. The latter fits more closely with the tone of the series. The Sopranos did not glorify mob life. The men certainly enjoyed the fruits of their labors, but frequently ran into the consequences of poor decisions. Even as he ate with his family, Tony was in danger of being hunted down by a rival at any time.
No matter which ending the writers chose, The Sopranos lacks the satisfaction of watching Jesse peel off into the night opportunity or the awareness that the grim circle of life in Baltimore continues.
The legacy of the finale is cemented in American television lore. The sudden black screen allowed viewers to debate the ending, but ultimately a great show’s most memorable scene was not great acting or writing. The drama’s biggest moment remains an unknown. The flaw of the finale was not that Tony was killed or that he lived on with his family, but that there is no ending. Instead, Tony may or may not have been brutally slain as he ate with Carmella and his children. He may or may not have finished dinner, gone home, and watched a movie.
Had Tony Soprano been killed, it would have been an anticipated and appropriate ending to a legendary character. If David Chase had simply opted to fade as the family ate he would have succeeded in giving Tony and his three family members one last moment on the screen. Chase managed to create one of the great television series of all-time, but by finishing the series with a question mark he left his audience in a state of confusion and disappointment. The show deserved a more definite ending, whatever that conclusion was. Unlike shows like The Wire or Breaking Bad, The Sopranos will perpetually feel incomplete and ultimately casts a negative pall over an otherwise well-done show. Walt died. Life went on in Baltimore. Tony is forever intertwined with a black screen and Steve Perry singing about South Detroit.
The final scene of The Sopranos:

3 thoughts on “The Ten-Year Legacy Of The Sopranos’ Finale”

This site uses Akismet to reduce spam. Learn how your comment data is processed.